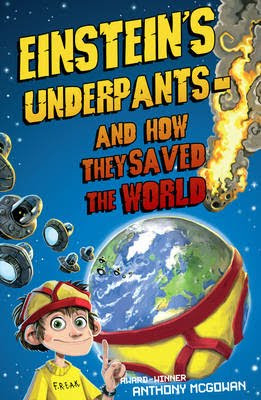 'Einstein's Underpants- And How They Saved the World' written by Anthony McGowan is published today by Corgi Yearling. This was a book cover I worked on in September last year. I read the manuscript first and thought it was hilarious. It's just the sort of book I'd have loved reading as a kid. It's very very silly.

Alexander is given a pair of old stained Y-fronts, by his bonkers Uncle Otto. Reputedly worn by Albert Einstein himself, the pants bestow magical powers of cleverness on Alexander. And that's just what he needs to foil an imminent alien invasion and an impending meteor strike that could destroy all mankind.

He recruits a bunch of misfit kids from his school with this advert in the 'Items Wanted' section of the school message board:

"Any persons with special powers, such as super strength, telekinetic ability (i.e. moving stuff with just your brain), anti-gravity skills (e.g. flying), controlling magnetism, etc. etc., to join an elite team of heroes to save the world. Come to room 111 at 12.30 on Wednesday. No time-wasters. No loonies. Refreshments not supllied."

Although I liked the previous advert more.

"Girlfriend. Must be gorgeous and like snogging. She must not mind clammy hands, acne, BO or bad breath."

If only I'd thought of this, I might have met my wife much sooner.... 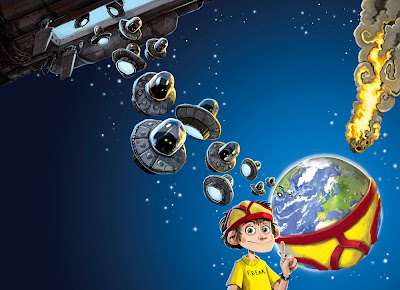 There were a few fiddles with deciding where Alexander should go, and at one point his friend Melvyn featured on the back cover. I might post some roughs if I can dig them out....
Posted by jonny duddle at 5:09 pm 5 comments: