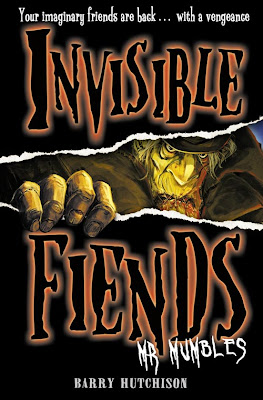 I was out and about yesterday and I spotted another book cover I'd done on the shelves of W.H.Smith! 'Invisible Fiends: Mr. Mumbles' by Barry Hutchison was published by Harper Collins in February.

This was something a little bit different for me, at least as far as children's publishing is concerned, because it's HoRRoR!!! EeeEK!!

I painted this cover last summer, after reading Barry's manuscript. It gave me the heebie-jeebies, and scared the life out of me. I thought 'The Pirate Cruncher' was scary until I read 'Mr.Mumbles'.

The 'Invisible Fiends' series is about a boy named Kyle who has forgotten the imaginary friends he had as a small child... But they've not forgotten him....

So Mr.Mumbles is the first to return, and it was all a bit scary for a big wuss like me, particularly the climax in a disused swimming pool which further reinforced my fear of dark, murky water.

I love the graphic look of the finished covers with the slit and torn edges. I went through a few different ideas with the designer, Nina Tara. Here's the first rough: 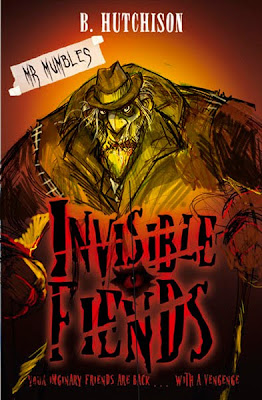 And a second version, where we tried to include the whole figure, but it lost impact and Mr.Mumbles was too small on the page to get a good look at his stitched up mouth and other details: 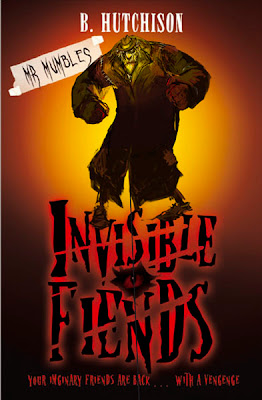 So we kept with the full figure on the back of the book, and ended up with a cool, creepy close-up on the front. Here's a close up of the final art, with the temporary paper edge from me, before Nina added the torn white edging and the type: 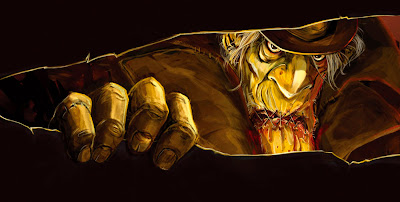 Next up is Raggie Maggie. I've not read the book, but I painted the cover from Barry's description of the character. I wasn't going to show this one, because I'd not seen the final design, but I just found this on Amazon: 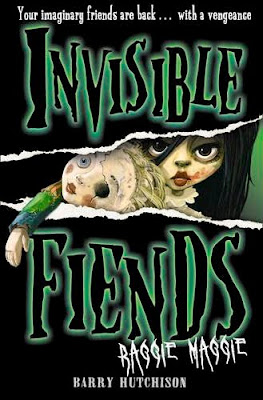 I'll post some WiP, sketches and roughs for 'Raggie Maggie' when the book is published in August!
Posted by jonny duddle at 10:59 am 1 comment: 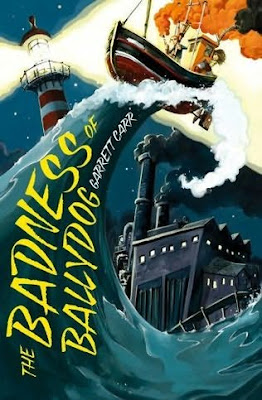 I received a new book in the post last week. Somehow I missed publication, but 'The Badness of Ballydog' by Garrett Carr was published on 4th February.

This job was done at quite short notice, and I didn't get to read the manuscript, but I really like how it turned out. I was happy with the artwork, and I think Simon and Schuster have done a great job with the design. The book sounds fun, and it's next on my list once I've read a couple of manuscripts (for illustrations I'm currently working on). Here's the blurb from the back of the book:

"Something is coming ...something big. May knows it, but no one will listen to her. She is an outcast due to her odd ways and freakish ability with animals. Andrew knows it, but he has his position as gang leader to maintain. Ewan knows it, but what can he do? The sea creature is the biggest living thing on the face of the earth. And it won't stop until it has destroyed Ballydog. Can three teenagers save the baddest town in the world from its fate? Is it even worth saving?"

Here's the rough I submitted, and the final wraparound artwork. I had fun with the stylization of the buildings and the waves, but not much changed between rough and the finished painting. As usual, the colouring-in was all done in Photoshop CS3 and Corel Painter 11. 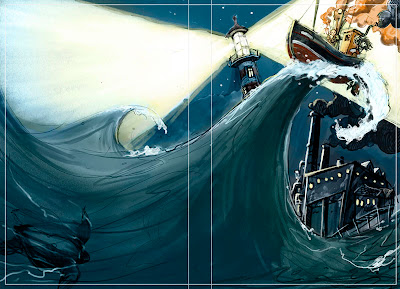 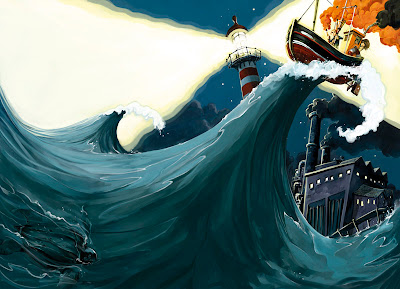 Posted by jonny duddle at 4:12 pm No comments:

It's World Book Day! Hooray! My daughter, Daisy, scooted off to school with an extra bag, containing her favourite book and a hat to match. And nope, it wasn't 'The Pirate Cruncher'. It was Julia Donaldson's and Axel Sheffler's 'Room on the Broom'! Daisy had her witch's hat in the same bag, and when we arrived at school they were twenty kids in different hats all chattering away excitedly. Kids love books! And hats!

So my daughter's favourite book isn't 'The Pirate Cruncher', but someone out there likes it, because I found out the other day that I've been nominated for the "Read it Again!" Cambridgeshire Children's Picture Book Award! The award is for a book published in 2009 by a first time author/illustrator, and I'm very excited!

It's great to be nominated, but more importantly, it's fantastic to know that there will be so many children reading my book (and those by the other nominees) in their schools. As a newbie to the world of children's books, I've had limited experience reading my book in front of children, but when I have dressed up and read aloud it's inspiring to see how enthusiastic the children can be, especially in a group situation.

The award launches today, ('World Book Day'!) and the winner will be chosen by the children of Cambridgeshire, who will vote for their favourite book. I think it's brilliant that the children make the decision, and I'm hoping they'll see the picture of me in my pirate outfit and be too scared not to vote for me.....

One more thing.... A few months ago I took part in the 'Big Draw' event at the Discover Centre in Stratford, London. This weekend, it's the turn of the 'Big Write'! The event starts today and runs for four days. There are a host of authors and illustrators, including Axel Scheffler, Emma Chichester Clark, Cressida Cowell, Dugald Steer (aka Dr. Ernest Drake) and fellow Arena illustrator, Matt Buckingham, who will be talking through the process of creating a picture book with his new book 'Bright Stanley and the Cave Monster'.

And for any budding illustrators who've managed to spot my new blog in time, on Friday night there's an adult event discussing picture books and how to become a picture book artist and/or author, featuring none other than my lovely agent, Tamlyn Francis! 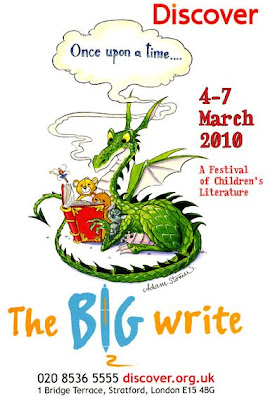 Here's the programme cover, with a lovely illustration by Adam Stower!

I thought maybe a brief introduction might be worthwhile.

I'm a freelance illustrator and concept artist living and working in Buxton, arguably the highest town in England and almost in the UK's very lovely Peak District.

I worked for eight years in the computer games industry, at Codemasters, Warthog and Eurocom, before going freelance in 2006. Stuff's been a bit mad since then, and I've worked for some fantastic clients in games, film and children's publishing. As a kid my two big goals in life were to write and illustrate my own book and to design stuff for a movie.

With those two big goals in mind, I've been working on and off for the last two years on a major movie project with Aardman Features (sooooo exciting!!), although I can't show even the teeniest morsel of work, because it's all hush hush. What isn't hush-hush is that the project is a stop-motion movie adaptation of Gideon Defoe's "Pirates! In an Adventure With Scientists!" For anyone who's not read the book, try and grab a first edition while you still can! I've got three, and one of them is signed by Gideon! Woohoo!

Gideon's pirates are a daft bunch of hopeless ham-lovers who stumble across a young Charles Darwin and astound the scientific community of Victorian London with a funny looking parrot. Gideon wrote the book to impress a girl, so he deserves everybody's support.

And just to complete my life's ambition, my first picture book, 'The Pirate Cruncher' was published by Templar in September 2009. Here's the blurb from the back of the book:

I was sailing one day and what did I see?
And Island of Gold in the Scurvy Sea!
With a fiddle-de-dee,
There'll be treasure for me!
Fiddle-de-dee, across the Sea!

But there's one small thing I forgot to share-
There's also a MONSTER waiting there...

And that about sums it up. It's not a long book, it has a moral and some grown-ups might find it scary.

The launch of the book coincided with Arena's 'Pirate Party' at the Discover centre in Stratford, East London. The event was part of the Big Draw, and the place was swarming with mini-pirates drawing on every wall and floor, which were thankfully covered in paper. Some other Arena artists did some amazing work and demonstrations, including Matt Buckingham, Alex T.Smith and Adam Stower. Here's a picture I liked from the day.... I'm the funny looking fella with the pirate hat and something in my eye, and the little girl is called Siwan and is a particularly fearsome pirate of London Town. Oooo-Arrr! 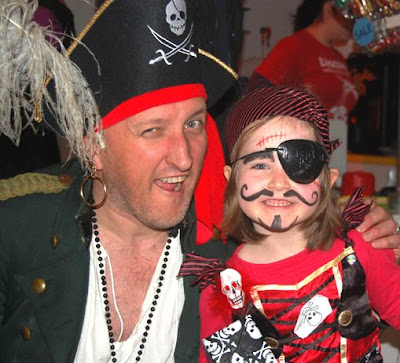 So life's been pretty pirate-y for me in the last few years (you can throw in fourteen months at Eurocom working on a 'Pirates of the Caribbean' video game too), but then I used to be a pirate once, so I've got a decent excuse. One day I might even post some pictures.

But after all the pirates, it's sci-fi next! Picture book number two is in the works and it's going to be full to the brim of laser guns, aliens, robots and spaceships! Yeh!

And maybe the odd space-pirate...
Posted by jonny duddle at 10:02 am 6 comments:

I signed up for this blog about three years ago, as an easier alternative to updating my website. And three years later, I still hadn't posted a thing. So I decided that this would all change on 1st January 2010! Yup!

On 1st January 2010, I would start my blog and update regularly. I would also stop drinking wine and beer for one whole month, stop eating chocolate and biscuits, use our rowing machine every single day, lose half a stone per month for three or four months and stop doing work at the weekends.

So after two whole months, I've just finished a heavy weekend of colouring in, I drank too much wine on Friday night, I ate a whole big bar of Green & Blacks 85% dark chocolate with the wine (enough dark chocolate to kill a small dog apparently), it's nearly three weeks since I used the rower, and I weigh approximately two pounds less than I did on the 1st January.

But I have started my blog.