I finally finished 'The Pirates next Door' (starring the 'Jolley Rogers'). I barely slept over the bank holiday weekend and got all the files to Templar for Tuesday morning, including a nice big poster for the back of the dust jacket (see below, in progress on my messy desk) and a family tree for another part of the fold-out jacket. Luckily, the magical interweb allows me to upload files from my spare-room-office in the Welsh hills, to a friendly computer in Templar's Dorking office. Isn't technology brilliant? 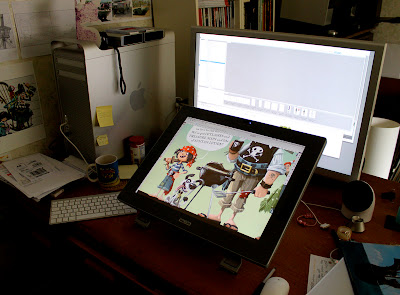 I took a day off on Wednesday, to dismantle a rotten shed my dad had moved from house to house since the 1970s. With the help of my friend David, we attempted to build a new one, only to disturb a bees nest in the process, and realise that the shed floor didn't fit the wooden base. So we each had a nice big bottle of beer in the sunshine instead.

Then it was off to Hay-on Wye on Thursday for my first ever appearance at the wonderful Hay Festival. I had a lovely time and enjoyed the marvellous company of fellow children's book illustrators Adam Stower (buy 'Silly Doggy', it's lovely!) and Ed Vere ('Banana' is my one-year-old daughter's favourite book!). I dressed up as a pirate for my Friday morning event, and was not alone. Well over half of the children in the audience had dressed up too, and I had a terrific time drawing a gnarly pirate under their direction. He even ended up with some fairy wings to keep one little fairy happy. I need to wangle some photos from somewhere......

'The Pirates Next Door' is due to be published in October. More to come!

And for anyone who wants to hear an array of silly pirate voices, the 'Pirate Cruncher' with audio CD is now available from all good book stores! Oo-Arr! 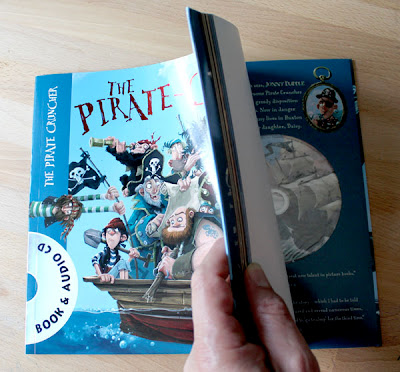