For the last three and a half years, I've been working with Aardman Features on a new stop-motion movie about pirates, based on the hilarious series of books (honestly, they're brilliant, buy a copy now!) by Gideon Defoe. This has taken up a big chunk of my life since early 2008, and I've designed a load of characters for the film. It's been the best experience, and I've loved every minute.

But never mind all that soppy stuff, Aardman seem to be releasing lovely pictures for everyone to see! Here's the first official teaser as spotted on 'bleeding cool'... 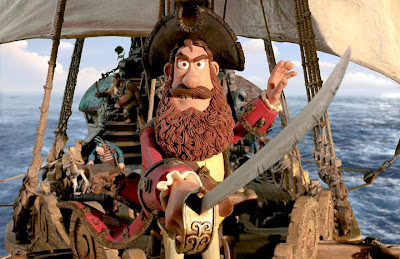 Here's the Pirate Captain, designed by me and Zebe, with lots of input from Peter Lord (and the doodlers in story, and the sculptors in model-making) and based on some early sketches by Carlos Grangel. In the background you can see little bits of the Pirate with Gout, the Burly Pirate, the Pirate with an Accordion and the Pirate with a Scarf.