EeeeK! It's been two months since I posted! That's rubbish!! But anyway...

Last week I visited London Town because the lovely folk at Templar had asked me to do a sound recording of 'The Pirate Cruncher', so they can publish a version of the book with a CD in the back. They said they could hire an actor, but it's more special when the author reads the book. 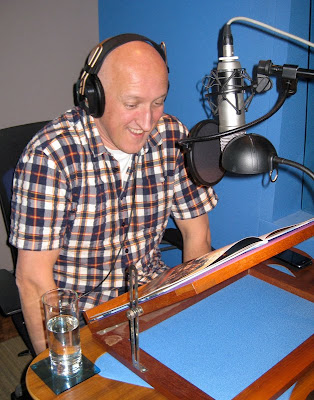 So I found myself in a proper recording studio, with big headphones on, and the sound engineer/director asking me to "ham it up a bit". I think he was used to proper actors, there were CDs by Stephen Fry and Dawn French on the desk in reception, rather than bungling doodlers from Wales. But he did get me to do a variety of silly voices, which I am sure will be terribly embarrassing when I have to listen to myself on CD. I even had to keep the voices consistent for each character, which doesn't normally happen when I read the book to kids.

Thank you to Rebecca Elliot, Templar's UK Publishing Manager, for coming along to hold my hand, and sending me the photo! And thanks to Heavy Entertainment, for trying to make me sound like a pirate!
Posted by jonny duddle at 6:32 pm 3 comments: