Tales of the Spiffing 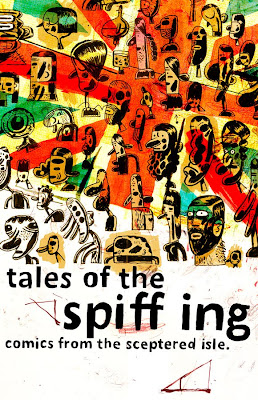 As I've mentioned a few times on my blog, I've done a lot of work for Aardman Features over the last three years, designing characters for their upcoming 'Pirates!' movie.

I was having a couple of months off last summer, when Ashley Boddy and J.P.Vine assembled a group of artists to work on a comic anthology called 'Tales of the Spiffing: Comics from the Sceptered Isle'. But then someone dropped out, or they had not enough pages or something, and the day before it was due to go to print, Ashley asked if I fancied making a contribution.

I tried to do a very, very quick comic, it all went to pot and I was in a big huff in my studio. So I ended up adapting an existing image to fit the book, and that's what's appeared in the anthology. Not a comic by me. Just a picture.

But there are lots of lovely comics by other talented artists, all of whom are either employed by Aardman, do contract work for Aardman or have worked freelance on one of their projects recently. Ashley's set up a blog with some preview images and a Paypal link for anyone who wants to get their grubby hands on a copy..... click the image above to be whisked away to the 'Sceptered Isle'!

And Ashley says I can do a comic next time. So I will. If he remembers. Now that I've finished with all the 'Pirates!' work, and I don't go there anymore. I think I'll keep popping in and annoying everyone, so he doesn't forget.
Posted by jonny duddle at 4:25 pm