The King of Space!

I've recently started work on my next picture book, 'The King of Space'. This has been a long time waiting in the wings... 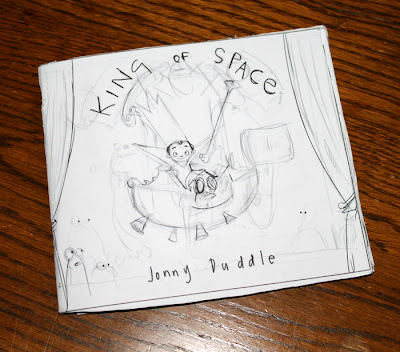 In October 2004, I entered CGtalk's 'Grand Space Opera' challenge, and came up with the idea of a little kid, who wanted to take over the whole universe and become 'King of Space'. I loved the idea of a small and grumpy boy, wrapping a sheet around himself, making a crown, and wreaking havoc whilst becoming master of the known universe. I did a series of sketches, but never finished the challenge due to moving jobs and trying to renovate a house in time for an impending baby.

But I kept on with doodles of the boy, Rex, and wrote a few short strips, that never actually got drawn. I did use 'The King of SPace' for some Q&A answers (issue 12) in Imagine FX magazine, and a poster workshop (issue 18) too.

In 2007, I visited Templar Publishing with my lovely new agents, Arena Illustration, and amongst other ideas, I took a bunch of drawings for 'The King of Space'. Having originally envisaged the whole thing as a comic strip, I wasn't sure it would work as a picture book, but Templar's Art Director, Mike Jolley, really liked the concept. But first, Templar were really keen on me developing a portfolio piece I'd done called 'Ye Pirate Muncher', and that became my first published book in September 2009.

I was back at Templar in 2010 to talk about a second book, and took along some (very rough) roughs for a 'King of Space' picture book. But 'The Pirate Cruncher' had sold quite well, and Templar were keen for me to write another pirate book, so I wrote a story called 'The Jolley-Rogers', that later became 'The Pirates Next Door'.

But this summer, for my third book, I've been working on ideas for 'The King of Space' and that's what will be coming next, in autumn 2012!

I started a blog in early 2007 which was originally going to feature strips and drawings and general musings, but I'm going to resurrect it to show the picture book process from start to finish (whilst still trying to keep much of the story secret). Click here, or on the 'King of Space' link on the right in my links menu. there'll be some new (and old) stuff there over the weekend!

I also used 'The King of Space' for a concept tutorial for Computer Arts magazine in early 2009. Here's the finished art for that... 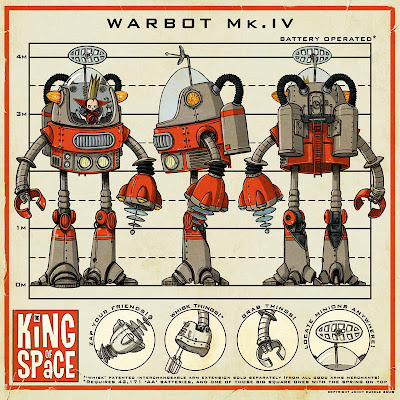 This is great news! I remember the character from the ImagineFX poster tutorial, and thought then it would be a great idea for a book. Looking forward to seeing what totalitarian high jinx he gets up to.

Thanks Leighton! The only problem with developing a concept that's been floating around for seven years, is limiting the ideas to something that will fit coherently in a picture book!

Are you typing replies with your left hand?

It's good to see King of Space being developed. I remember seeing him on duddlebug a lot of years ago. Good luck with the project.

can't wait to see more about this :)