What a bonkers couple of weeks.... I've been to a movie premiere, another premiere-type-thing for the same movie, a book award night, and then I did a Q&A at a London cinema and tried to talk about interesting things about being a character designer. Until last Wednesday, I'd only left the village three times since Christmas. 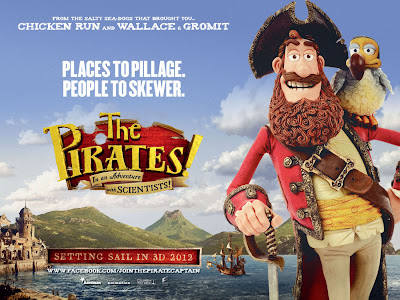 It all started on 21st March, with a very swanky premiere for 'The Pirates! In an Adventure With Scientists!' at the May Fair Hotel in a swanky bit of London.

We were given swanky individual bottles of champagne (with straws) on the way in, which was the start of a swanky evening with a little too much in the way of bubbles. I travelled down to London on my own, by train, but Aardman had sent a coach load of folk, so it was lovely to see lots of friends from the studio. Peter Lord introduced Gideon Defoe on stage, who wrote the book the film is based on, and then introduced David Tennant and Hugh Grant. And then the film started with no adverts! Brilliant! No boring adverts! Hoorah!

And the film was really, really, reeeeaaaally good! Although I spent most of the time looking at the character designs and wondering what I could've done differently. And then when the credits rolled, my name was right near the beginning, which was rather good too. And on the way out of the theatre, I chatted to Peter Lord on the way down the steps, and then briefly met Terry Gilliam, one of my all time heroes, when he came to shake Pete's hand, and then asked Bill Bailey where the toilets were. Then I bumped into Pixie Lott by the bar, Not 'bumped' in a cool, sophisticated way, but more 'bumped' in a too-many-posh-drinks-for-a-northern-bloke-not-looking-where-I-was-going kind of way. Hobnobbing or what??

It was all far too exciting. And then I drank far too many glasses of champagne at the party (they just kept topping up everyone's glasses!!) and spent an hour-and-a-half trying to find the way back to my hotel, using 'maps' on my iPhone. It only took twenty minutes to walk to the premiere, so I've no idea which route I took back. I woke up with a fuzzy head, and somehow caught a train back to Wales.

On Sunday, I took my wife and eldest daughter to the movie's Bristol Premiere, where everybody who had worked on the movie brought along friends and family and there were lots of screenings, tattoos, face-painting, and pirate-themed balloons. It was a late night for Daisy, but we had a lovely time, and I actually enjoyed the film more, because I just watched it without worrying about my designs. Me and Daisy both dressed the part, and Daisy had Cutlass Liz painted on her cheek for the rest of the week. 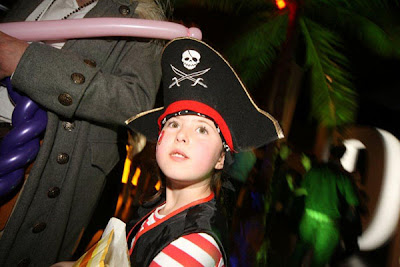 We were back home on Monday, and the on Wednesday I was off to London again for the Waterstones' Children's Book Awards at Waterstones Piccadilly. More of that in a minute, but the whole evening turned out rather well.......

I was back home on Thursday, but off to London again on Friday morning for Arena's showing of 'The Pirates! In an Adventure With Scientists!' at the Stratford Picture House, followed by a Q&A with me. It was quite nerve-wracking, but the audience were all very polite and asked nice questions and Tamlyn from Arena made sure I was suitably lubricated with rum for the event.

We got back home on Saturday and I feel a bit overwhelmed. What a bonkers couple of weeks. It's back to normality now, and more importantly, back to the drawing board to get stuck into 'The King of Space'.