Behold! The King of Space!

I spent a big chunk of last year working on my upcoming picture book 'The King of Space'. The main character, Rex, was created in 2004 for an online art challenge, and has been lurking around my sketchbooks and doodles ever since. This book was almost my first picture book for Templar in 2009, and then was even closer to being my second picture book in 2011, but in both cases pesky pirates won the day (Oooo-ARR!), and 'The King of Space' went back in the plan chest. But Templar did think it'd make a good third picture book, and it's very nearly here! 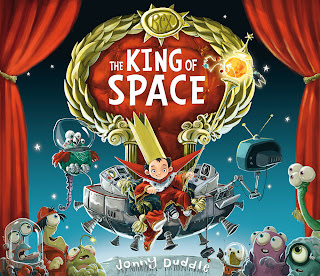 Rex is a young boy who lives on a small moon, on his mum and dad's moog farm.  He has a plan to become King of Space. But he doesn't want his mum and dad finding out, because they might be cross. Rex enlists his clever friend, Blip, to help him build a robot army. He also has a crush on a girl in his class called Princess Kooki. Could that be the weakness in his plan?

The whole thing is a bit of an homage to my childhood in the 1970s and 80s, where sci-fi was the best thing since Breville toastie makers and girls on roller skates.

The book will be published on March 1st, but is already available to pre-order on the magical interweb... for example, HERE. I received an advance copy in the post a week or two ago. Here's a bit of a rubbish photo. 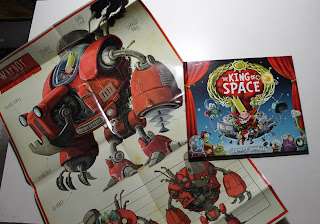 The book (right) is the same size as 'The Pirates Next Door', and the poster's a whopper!

1. There are no pirates in this book. Actually you may spot a couple, but they don't have much to do with the story. So mums and dads might not have quite as much fun with pirate voices, but feel free to read it all in pirate voices if you like. Believe it or not, I can draw stuff, other than pirates....

2. It doesn't rhyme. I like rhyming books, but this one just didn't feel right rhyming, just so you know. My next book rhymes, but you'll have to wait a while for that one, because I've just started the colouring-in. It's not about pirates or space or moogs.

3. It's got quite a lot of words. Just less than 1500 words, in fact. Which is about 400 words more than 'The Pirates Next Door', and 300 words more than 'The Pirate Cruncher'. This might be a good or bad thing, depending on your point of view. If you don't like too many words, there are lots of nice pictures to look at, and might even be able to work out the story, even if you stop reading when you get past 1100 words or so. My three year old daughter likes it, and makes various sound effects whilst turning the pages.

4. A lot of the words are in speech bubbles and some pages are a bit like comic strips. I like comics. Here's an example: 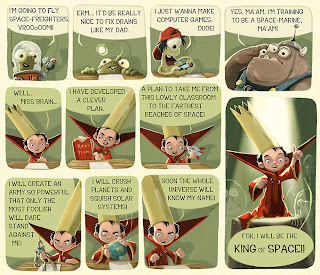 5. Some of the pages have a lot of black on them. The story is set in the great emptiness of space. Make sure you have a light on when you're trying to read this book.

6. It's got a big gatefold, like 'The Pirates Next Door'. I have been informed by my grown-up readers that these can be a bit cumbersome during bedtime reading. But kids say they love them, so you parents will just have to suffer for the children and remember it's still a lot easier than folding an ordnance survey map in high winds. This gatefold has lots of spaceships,  quite a few robots and some moogs. 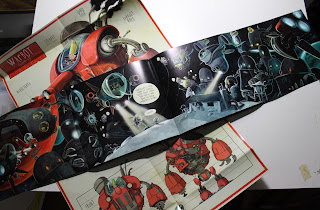 7. If you live in the UK, and you buy the hardback, you get this whopping poster. It's 56cm x 81cm. And it's got a Warbot on it. If you ask me, it's almost worth buying the book just for the poster, but then I am biased. I've got mine on the wall above my desk, and it looks fab. I ironed it to get rid of the folds. 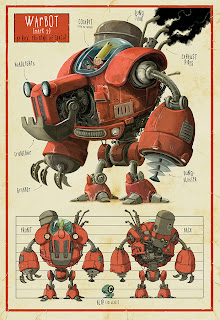 If you live in the USA, you gte a line-up of all the characters in the book, on the back of the dust jacket. It's not as big as the poster, but it's still rather nice, and you can learn everyone's names. The UK get the line up too, sharing the back of the poster with the cover art.

8. 'Moog dung' is mentioned quite a few times. Rex lives on a moog farm. And you can't live on a moog farm without encountering moog dung. I live in the countryisde and I could frequently smell aromas similar to moog dung whilst colouring-in this book. It's all part of the moog experience.... 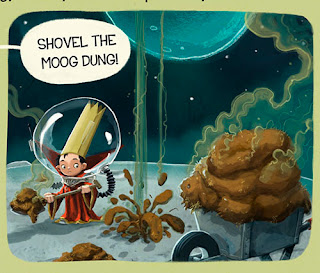 So, if you like aliens, alien cow things, spaceships, dung rays, and big robots (or you know someone who does), 'The King of Space' is coming soon, to a galaxy near you.... It's published on 1st March in the UK and March 12th in the US of A.

I'm so excited for this book. I really enjoy seeing all of your process work and the development of these projects. When I was a kid I would have absolutely died to have books like The Kind of Space or The Pirate Cruncher. Best of luck with the release! :)

This, without a doubt, is our most looked-forward-to book of 2013!

Come and celebrate the King of Space in Cheltenham! We'll help

Thank you Lynell, and thank you ReaditDaddy (I hope it doesn't disappoint!)

cheltwatersYAreviews... Funnily enough, there is mention of me visiting Cheltenham Waterstones in March.

Looks amazing! We love the pirates and can't wait to see the new book. And that incredible poster. Hoping to come see you in Southampton in March so will bring our pocket money with us :-)

I have bought your book in Turkish 3 weeks ago.
My 5 years old son just loves it.
Since then I have to read it to him every night!
He knows every sentence by heart and corrects me if I misspell a word or forget to read it :)
He is also a fan of Pirates so I will definetely buy that one, too.
Warmest greedings from Istanbul
Isil

A new type of investment That is ready to make money continuously With the best casino services.
เกมยิงปลาเว็บไหนดี
สมัครบาคาร่า มือถือ
ป๊อกเด้งออนไลน์ เว็บไหนดี