There be Pirates Abroad!
As I mentioned in my post yesterday, I've been without the magical world-wide interweb for several weeks, since moving to the Welsh hills. That was fixed a couple of days ago, and once again I will need to show some restraint if I'm going to get any work done.

But one big thing happened while I was cut off from the world, 'The Pirate Cruncher' was published in the United States of America!! Hoorah! Or should I say "Ooooo-ArRR!"

I was sent a copy of the book a little while back, and on first glance there was something peculiar about it. Hmmmm.

Spot the Difference
(apart from the jaunty angle!) 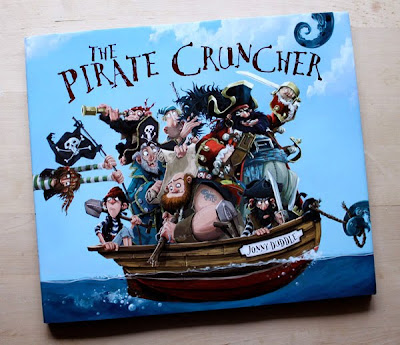 Here's the US cover (above), and the UK cover (below) 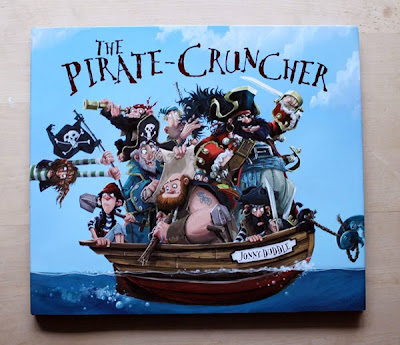 I'm afraid there are no prizes. I just wanted to point out to the US book buying public that they're actually getting a little bit more for their money. Amazon.com has quite a few pages in it's preview, if anyone would like to 'Look Inside'.... Look here!

There are also a couple of lovely reviews. For now at least, it's got half a star more than the UK version with a full five stars, but then a couple of snippets in the book have been changed and they rhyme better. That may well be it, a quarter of a star per rhyming couplet. Or maybe it's just the extra bit of tentacle on the cover. Ooops...

And on a related note, my publisher told me that there are only a couple of hundred copies of the UK hardback left in their stock cupboard. So that's good. But if they manage to flog the lot, a paperback version will be published in the UK on the 1st June, I think.
Posted by jonny duddle at 9:37 am

Wow, I LOVE your artwork. I saw this something akin to this in a newly discovered (for me) Spectrum magazine, and was drawn to your style because that is exactly what i would like to achieve in my style, or something close!

a HUGE congratulations are in order here! I'll be buying your book here in the U.S.

why didnt the US one have the top tenticle???

Kyle, thanks! I hope oyu enjoy the book when you get it, thanks for the support!

Adele... It was the US version with the tentacle! It wasn't on the original artwork, and they added it. They changed the text a bit too, and it actually reads a bit better!

Hey I just gotta say that I love your stuff. I bought the Pirate Cruncher a couple months ago and I love it!
Excellent work!

My three year old and I (maybe me a bit more actually!) LOVE Pirate Cruncher. I may have missed this somewhere else on here, but where can I get a print to hang on me wall??