'Beastly Business: Battle of the Zombies!'
One of my first book jobs was a cover and fifteen black-and-white illustrations for the first 'Beastly Business' book, 'Werewolf vs. Dragon'. That was published a couple of years ago, and now we're on number five! 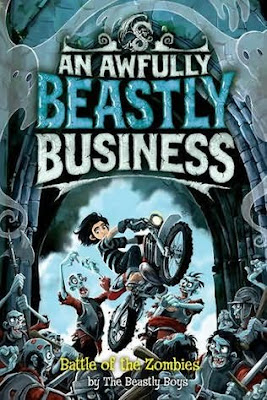 'Battle of the Zombies' was published at the end of last week, so here's the cover, which has a lenticular in the centre that changes the normal Ulf in to the werewolf Ulf. The lenticulars are fun to look at, but make the cover a little bit complicated to design, because anything that flips within the lenticular (in this case, Ulf on his dirtbike and the two grabbing zombies) has to be contained in a circle in the centre of the image, and I also have to allow an area for 'bleed'.

Each book has fifteen illustrations inside which I draw in Photoshop on my Wacom Cintiq, with a brush tip that gives a traditional 'pen and ink' feel. Here's one, showing the ghostly Headless Harold looking for his undead army, who are buried in the woods. He's followed by the regular baddie, Baron Marackai, and his incompetent henchmen, Blud and Bone, aboard their wobbly tractor. 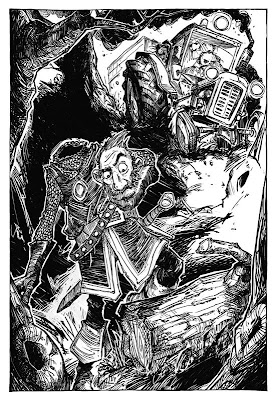 I've also been working on some new covers for the paperback versions. Books one and two are done, and I'm working on books three and four this month. They don't have the lenticulars, and that makes them much more straightforward to design and 'paint'. Phew.
Posted by jonny duddle at 11:00 am

Hi Jonny,
I love that black and white piece, the traditional looking hatching is wonderful. Will have to try and pick up one of the books!
Ben
www.benpowis.net

Hey Jonny, whilst looking around the kids book section in Waterstones yesterday in Leamington Spa, I spotted your Pirate-Cruncher book. I immediately liked the style of the cover and being a games concept artist myself, I could tell straight away that the person who illustrated this must've worked in games. So I promptly bought the book and must say I really love your paintings. I confess I haven't read it yet but assure you I will. It's great to see a fellow concept artist making waves (no pun intended) in the children's book arena. It's something I'd like to break into. Then I noted you're also working for Aardman, my #no.1 company I want to work for! So not only am I impressed with your art powers but also very jealous :) Anyways, just wanted to say Hi and also bravo on the great book. All the best, and I hope you like living in Wales (I'm originally from Cardiff) Cheers butty! Owen

Hi Jonny. I'm in Canada and would love to have some copies of your Pirate Cruncher. Amazon.ca advertised it but couldn't get copies from their suppliers when I ordered. I would love to give some as gifts to friends and especially relatives. You see my maiden name was Duddle. There are not many of us on this side of the pond so we always love to see a namesake doing well. Your art is amazing by the way. I paint representational work in oils mainly so glad to see the artist streak in the Duddle family is being expressed. Will keep looking for copies of your work overhere. All the best, Kathy Guenkel (nee Duddle) kguenkel@gmail.com

Ben... Thanks! I think the B&W's have got better over the series. I'm certainly happiest with books four and five. For now. :)

Owen... Thanks for buying 'The Pirate Cruncher'! My time in games has had a big influence on how I work now, and was great for building up skills. Where do you work? I lived in Leamington Spa when I got my first games job at Codemasters, working on 'Brian Lara Cricket'! Aardman are great, it's been a dream job for me. I'm just looking forward to the film release... And Wales is great , thanks!

Kathy... Another Duddle! Hoorah! I don't think there are too many of us on this side of the pond either. We could be distantly related..?? 'The Pirate Cruncher' did sell out in the UK and the US. I think amazon.ca sells the US edition and it's now back in stock. If you get a copy, I hope you enjoy it! And I'm experimenting with oils too. You get to the point where you need to get away from the computer and smell the fumes...... Thanks for posting!

I work at Blitz games in Leamington but am hoping to branch into feature animation across the pond soon (with any luck). I'm going to the ctn animation expo in Burbank next month to see what's what and who's who out there :)
Some of my latest stuff can be found here, should you be interested: http://www.owenwilliamsportfolio.blogspot.com/
Thanks, O