The Pirates Next Door!
(more news)

So, if anyone out there (in the UK) is super-keen to get hold of my next picture book, 'The Pirates next Door', the hardback has now been listed on Amazon and Waterstones! Hooray!

The hardback will feature a rather splendid fold-out dust jacket with the cover and a family tree on one side, and a large line-up of the Jolley-Rogers on the reverse. A bit like this.... 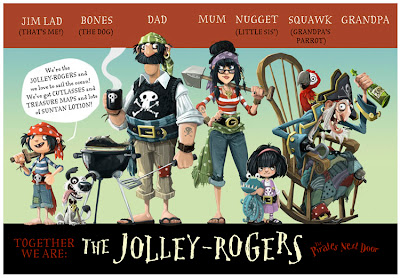 This will only be available on the hardback, and 'The Pirate Cruncher' hardback sold out before the paperback arrived, so if you want to decorate your walls with a funny looking pirate family, AND have a picture book to read in the wee small hours, you'd better order yourself a hardback copy.

If you're anything like me, you can buy the lovely hardback to covet and stroke and keep spick and span, and then buy a paperback version for your kids to clumsily destroy. My children have actually destroyed one of my first edition hardcover 'Pirate Crunchers', and now I can't get anymore, but I'm not kicking myself or anything. Honest. But I'm sure someone out there is kicking themselves that they let their five-year old chew chunks out of their first edition 'Harry Potter and the Philosopher's Stone' and draw wizards in felt tip in all the margins. So build a shelf that the kids can't reach, pre-order the hardback, and when it arrives you'll know your investment is safe from grubby hands. If you're feeling particularly flush, or want to show off your limitless wealth to friends, you could buy TWO hardbacks and throw one to the little tearaways, whilst secretly stashing the other copy in a plastic envelope on your special shelf.

'The Pirates Next Door' is currently at the printers in the far away land of China, and will be available on October 1st.

Ack, once again I wish I lived in the UK! Come on USA, get with the program!

Give it 20 years or so, and I bet the copy with the tiny teeth marks will be worth far more to you than a pristine copy! :)